Online sextortion within IoT a cybersecurity and privacy perspective


This post aims to show how online sextortion happens within the realm of IoT when the devices, applications and services that part of IoT are compromised by malware and malicious actors. The impact sextortion has on the targeted victims and the motivations for the malicious perpetrators who carry these attacks is explained. The role of cyber security will be discussed in how technology, awareness and education is key when used together in a holistic manner is vital in preventing online sextortion from occurring. Finally, it will examine what is currently happening to prevent online sextortion attacks from happening within IoT and what future methods or solutions could better prevent online sextortion from occurring.
The post is based off a prior research project (The analysis of the Socio-Technical Environment (STE) of Online Sextortion using Case Studies and Published Reports from a Cybersecurity Perspective) and it brings in elements of human factors and user interactions to the IoT domain.

Extortion is an old crime that has taken on a new dimension with developments in technology, that led to four men in 2016 taking their own lives. (Guardian 2016) With the advent of modern communication technology, there is now the potential to affect anyone who is targeted and becomes trapped in an online sextortion racket irrespective of the geographic and social distance between extortioner and extortionee. Online sextortion is on the rise in the UK and many other major countries. The Federal Bureau of Investigation (FBI) (fbi.gov 2017) describe sextortion as "a serious crime that occurs when someone threatens to distribute a person’s private and sensitive material if they don't provide the perpetrator with images of a sexual nature, sexual favours, or money". The perpetrator may also threaten to harm a targeted individual's friends or relatives by using the information they have obtained from that person's electronic devices or online profile unless the target complies with their demands. The FBI state that online predators work to gain the trust of the targeted victim by pretending to be someone they are not. Predators look for their prey by lurking in chat rooms and record users who post or live-stream sexually explicit images and videos of themselves, or they may hack into a target victims’ electronic devices using malware to gain access to their files and control their web camera and microphone without them knowing it.
A EUROPOL report (2017) from the law enforcement perspective of online sexual coercion and extortion form of crimes affecting children. Aimed to raise awareness and to contribute to the public debate. The report determined two broad perpetrator profiles.
Victim Profile:  Any person whose sexual material could be acquired by a perpetrator.

The issues surrounding online sextortion doesn’t at first seem to link to the field of IoT if the narrow view of IoT as focusing on small internet connected devices and sensors isn't relevant. (internetofthingsagenda.techtarget.com, 2018) In cybersecurity this doesn’t take account into malicious actors targeting specific people cybersecurity but focuses more on protecting devices and securing data. But if you take the wider view of any internet connected device that can share data online sextortion is an attack which can happen within the area of IoT. (forbes.com, 2014) With IoT as a giant network of connected "things" and people. The relationships are people-people, people-things, and things-things. This means you need to bring into the cybersecurity toolkit the means to protect people from malicious actors regardless of the type of attack and the means it is carried out.

Internet Webcams – role of hacking and malware in online sextortion 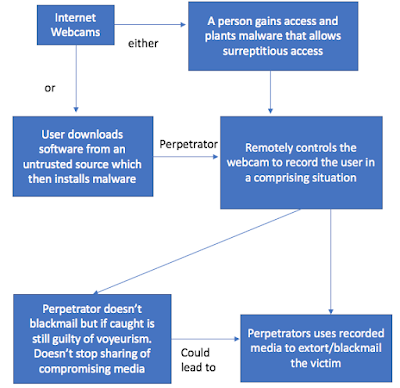 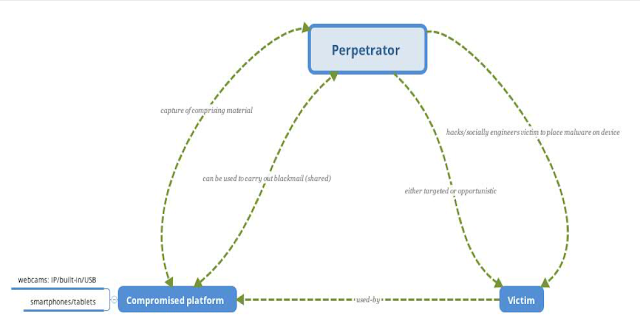 How Cybersecurity can and is preventing online sextortion

Expanded use of IP blocking of known malicious addresses