With calls for greater and more urgent action to decarbonise our way of life to counter the climate emergency mirrors in some way the mindset that saw research and action that happened when the 1970s oil and energy crisis broke out. Though while most of those actions were not steps to reduce carbon emissions but to end dependency on OPEC they also aligned with the first awareness of climate change brought about by rising CO2 in the atmosphere and the beginnings of the need to be more environmentally conscious. This post will examine some of the projects that were started in the 70s and the effect they have on us today.

Between October 1973 and March 1974 the price of oil quadrupled, thanks to the October/Yom Kipper war between Israel and her neighbours  the rising power of Opec and the boycott organised by a group of Arab states. Suddenly political leaders in the West scrambled to find solutions to what became defined as “the energy crisis”. Citizens agreed to turn off their Christmas lights and cope with fuel rationing. The public went from assuming that oil would remain cheap forever to fearing it would soon run out.
The response from countries such as the USA, UK and Denmark was to fund large amounts of research into alternative energy and increasing fuel efficiency. In order to reduce dependancy on foreign imports of oil and gas. Also, this chimed with the growing environment movement. But this measure were not about reducing CO2 emissions since the funding researching led to new coal plants being built, the North Sea oil and gas industry plus it would eventually  lay the foundation for the shale boom of the 2000s.
USA

Research into energy efficiency has been a part of the NASA Glenn Research Centre tradition since its inception. During World War II, the centre focused on reducing fuel demands in aeronautics by improving engine performance.
At the start of the Space Age in the late 1950s, their scientists and engineers continued to refine more efficient, cleaner alternative fuels and the engines that they power in air and space.
In the 1970s, citizens' growing concerns about industrial threats to the environment and anxiety over fuel prices prompted unified energy planning within the federal government. NASA Glenn (then NASA Lewis) worked with agencies such as the Environmental Protection Agency, the Department of Energy, and the Department of State to develop cleaner, more efficient solutions.


Using its expertise in solar cells for space, in the 1970s, Glenn deployed stand-alone power systems in remote areas of the world. NASA brought these villages grain grinding, lighting, communications, water pumping and the ability to refrigerate medicines and vaccines.
In 1978, NASA Glenn chose the village of the Papago Tribe in Schuchuli, Arizona, as the site for the world's first solar-powered village. From 1975 to 1985, NASA Glenn designed, fabricated and installed 57 photovoltaic systems in 27 U.S. locations and developing countries.


A Stirling engine is a heat engine with no valves. Cleaner, quieter and more efficient than gasoline and diesel engines, they are used commonly in submarines. In the 1970s, NASA Glenn's Stirling work focused on car engines that would eventually use hydrogen as the working fluid. Plus, Glenn began a Dish Stirling program to provide electrical power in small towns. A parabolic solar dish concentrating the sun's rays on the heating element of a Stirling engine. The entire unit can act as a solar tracker.
Stirling work continues at Glenn for electrical power in space and in the private sector for electric power and commercial products such as refrigerators, generators and coolers.

These technologies included a thermal reactor to burn up carbon monoxide and hydrocarbons produced by combustion engines and ceramics that could withstand high temperatures and corrosion. The centre also tested Stirling engines for use in automobiles and developed advanced batteries for electric cars.
In the new millennium, revived concerns over fossil fuels have increased demand for renewable energy. The same renewable systems developed for operation in space can be adapted for power and transportation on Earth. At Glenn, our past continues to fuel our vision of research for the benefit of all.

To focus on pollution from automobiles, the center set up the Automotive Systems Office, funded through the EPA, in 1970. Throughout the decade, the office developed and tested a variety of technologies designed to make cars cleaner and more efficient.


Following the global oil crisis of October 1973 the UK government funded and administered a range of R&D programmes in renewable energy. Despite the discoveries of large deposits of oil and gas in the North Sea during the late 1960s and continuing faith in nuclear energy the government was keen to explore the potential of renewable energy as what it described as an ‘insurance technology’. The UK renewable energy programme ran from 1974 until its demise prior to the privatisation of the UK’s nationalised energy industries in the late 1980s. There were two key elements of the wider programme: the Wave Energy Programme and the Wind Energy Programme. The UK also investigated geothermal, hydroelectric and solar.


The UK - mainly in Scotland - has the best wave energy resources in Europe, and among the best in the world. A research programme that emerged was Salter's Duck a first generation wave energy device. Stephen Salter, a professor at the University of Edinburgh in the UK who was working with robotics, saw a solution in the sea. He began working with a group to develop a device that would efficiently convert the power of ocean waves into usable electricity. Waves occur when water absorbs the energy of winds and condenses that energy into an extremely powerful, reliable force. The difficulty comes with trying to harness this immense energy. 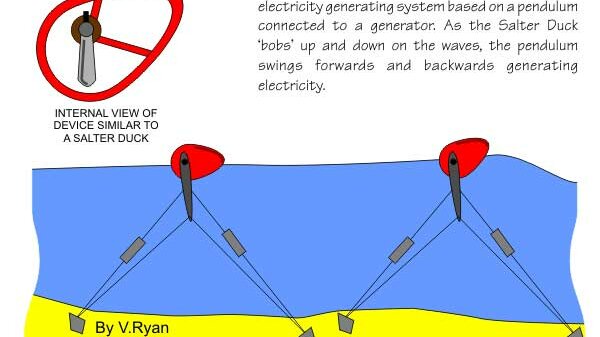 The group came up with a mechanism known as Salter's Duck (or the Edinburgh Duck), which they thought could reduce the country's dependence on oil. Certainly, the idea behind Salter's Duck achieved everyone's highest expectations about the potential of using wave energy. The return of cheaper oil and gas in 80s plus poor initially testing killed off the wave energy programme but some the research did return and there are some wave energy farms in the UK now connected to the national grid.

Denmark, which relied on oil imports for more than 80 percent of its energy needs, was among those reeling during an embargo that stretched into 1974. Its leaders contemplated: How could they reduce their dependence on foreign supplies?

In the coming decades, the government pushed Danes — largely through tax policy and mandates — toward energy sources such as wood pellets, solar power and a rapidly growing wind sector, which now churns out a staggering nearly 50% percent of the country’s electricity. (Denmark was the first country to build offshore wind farms, harnessing particularly fast-blowing winds.) Natural gas, which burns far cleaner than coal or oil, also played a prominent role after discoveries in the Danish part of the North Sea, though its production is now declining.
Denmark also focused on its cheapest energy resource: efficiency. The country's parliament laid the foundation for that effort in 1976, requiring electricity generators to capture and reuse heat that escapes their spinning turbines and would otherwise waft into the atmosphere. Called “combined heat and power,” such plants can utilise up to 90 percent of the fuel put into them, compared with about 40 percent from electricity-only generation, according to the International District Energy Association.
Danish leaders also ensured that local government would approve new heat and power plants at the centres of their communities — not on the outskirts, as is often the case in other countries — to maximise efficiency. These days, more than 60 percent of Danish homes rely on district heating networks: underground pipes that bring in hot water or steam. Those homes don’t need less-efficient boilers or furnaces. In Copenhagen, population approximately 600,000, nearly every building draws heat this way. And most of that heat is the captured waste from electricity generation.
Conclusion

With climate emergency we are essentially picking-up were we left off. Depending on viewpoint we are possible 20 to 30 years (50 years if very negative) behind in transition to near carbon-neutral world. But on the other hand carbon emissions would be far higher if the work from the 1970s if something hadn't been done. This is a reactive instead of pro-active mindset. This can seen as a failure to anticipate and get prepare to mitigate the problem before it arrives. This particular annoys me in the UK since it had vast potential to lead the world in nuclear and renewable energy and threw it all away, with us now having to play catch-up with. We will eventually get to a carbon-neutral future though it will require ditching a short term mindset and embrace longterm engineering and technology R&D. We are sort of going in that direction but it would be nice if we showed more ambition and imagination when it comes to building for the future.